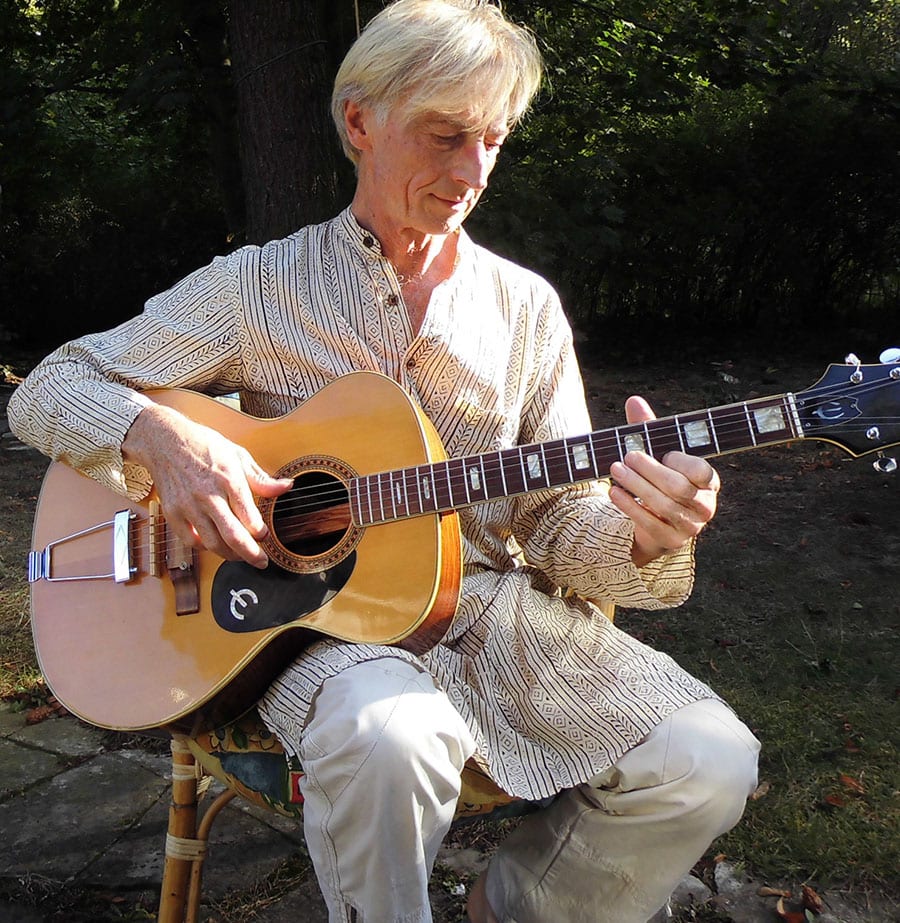 Anuvida is a natural born musician; his celestial music supports a meditative and healing environment. Raised in the beautiful countryside of northern Germany, he spent his childhood years singing, chanting, and playing instruments. In the 1970s, Anuvida ended up in Pune, India learning new kinds of meditation techniques while sitting at the feet of a a great master, Osho. Less than two decades later, he met Waduda from New Earth Records and got the chance to release his first relaxation music CD. Now, he has thousands of beautiful sounds in his acoustic library written and recorded over the last twenty years. New Earth is blessed to have Anuvida’s healing music to support a spiritual environment. 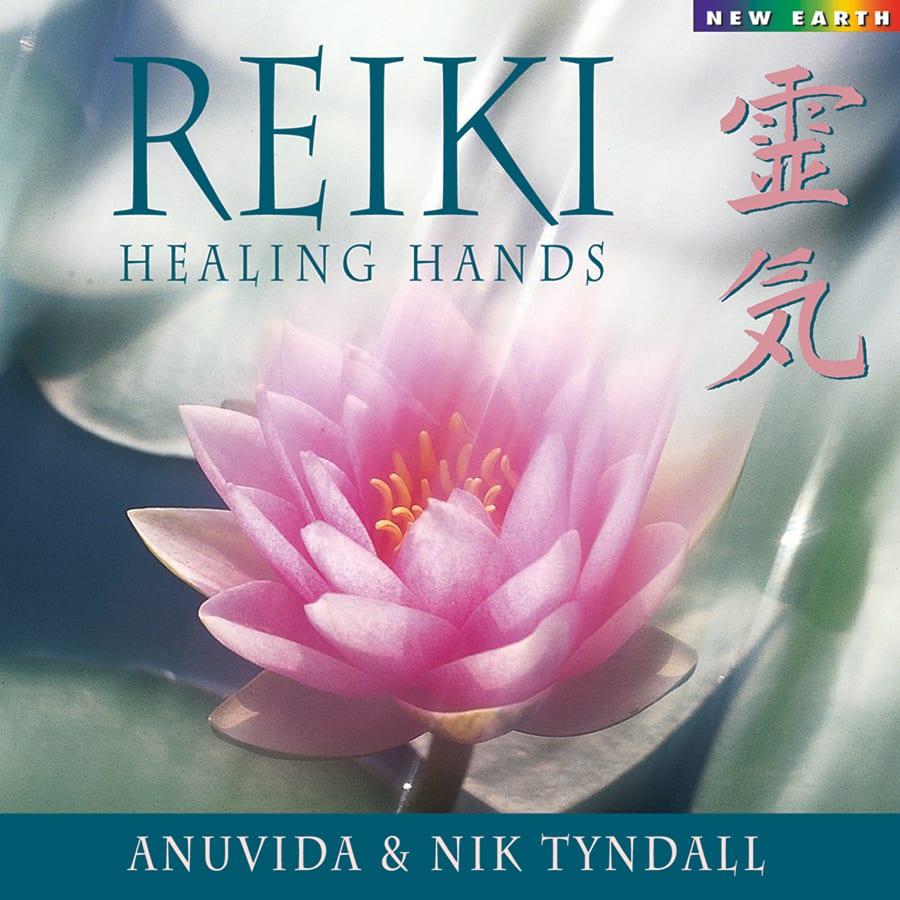 Born on February 15th 1952, childhood uncomplicated and almost like a fairy tale in the countryside of northern Germany, in the lively environment of grandpa’s bakery. I still hear the flip-flap sound of those big machines starting very early every morning, stirring the dough. And the smell of freshly baked bread coming out of the oven spreading its odor all over the house and the yard. When I think back, it seems as if it were in a different world – almost dreamlike and unreal when I recall it today.

The garden had all kinds of trees with fruits like apples and pears, bushes bearing several sorts of berries, long lines of vegetables which were thoroughly cared for by my grandma Marie. At the age of 8 or so I tried a few toy-instruments like clarinet and flute as well as an old piano which was stored away in one of our barns. I was always interested in the inside of things which is why I used to take everything apart and look underneath or add a few things to make the sound better or worse or at least produce some strange effect.

My grandma was the one who gave me my first guitar – a very cheap and simple acoustic instrument available from a catalogue at that time. I tried to get guitar lessons, but there was nobody around and so I fumbled around with that thing and practiced as much as possible. But I actually only improved when this guy Dieter joined my class in school and showed me a couple of chords and progressions. He even could play those instrumentals by the “Shadows” and “Spotnics” which impressed evrybody a lot.

And pretty soon I, too, was able to chant the early songs of Beatles, Stones or Kinks and others. It was in the late 60s when I got some experience in playing music and joined the first band which played all these cover versions of pop and rock songs from that era. It was probably the spirit of the time, but something essential happened to me in terms of all things in life – meaning, importance, reality and what is this all about. Lots of questions and no answers which could quench my thirst.

Those were the subjects a lot of bands were addressing and singing about, and this particular mood spread all around the world as well as into our small town. Hence, it was quite natural that there were enough hippies around to build up some sort of community in the countryside, managing to spend most of the time out there at a place where their acid-heads could be experienced and grass was not only green to look at. This is a scene from the 70s on the roof of the “bunker,” where our hippie-community used to waste its time listening to music, tripping and smoking pot, while the rest of the world was busy with serious affairs.

But after a couple of years I still needed some kind of warmth and cosiness, which I found in a woman, and I seperated from those communities to try relationship plus music. I didn´t succeed and found myself in shattered dreams and loneliness but was saved by another woman who pulled me out of this chapter and reloaded my lifepower. We spent a nice time making love and dreaming of something bigger. As a matter of fact, we moved into a huge house where lots of fellow travellers lived and joined this fresh pool of fellowship.

At that time, it was 1976, there was a lot of moving and exploring in the air and a couple of people went to India, which was the target for many spiritual seekers – so did I.

It was my first big adventure in terms of growing, going through fears and exploring and expanding the limits or your abilities. Travelling in India is really a very special adventure and involves a lot of qualities which most people have forgotten. Anyway, after spending a couple of weeks on the beaches of Goa, I ended up in Pune learning new kinds of meditation techniques and sitting at the feet of a great master Osho – at that time well known as Bhagwan the sex guru, a title which was actually invented by the international tabloid press because of its marketing value. Producing scandals is always more interesting to the people than supporting the truth or something simply beautiful –like it has been at the ashram of Bhagwan, which still can be explored. In spite of his absence and the transformation into a modern meditation resort, the buddha-field is still present there as I was able witness in ´93.

This was the year I met Waduda from New Earth Records and I got the chance to release a CD with relaxation music played mainly on the Kiboé. Nik Tyndall accompanied the Kiboé pieces on his synthesizers. He has thousands of beautiful sounds in his acoustic library and has produced about ten or twenty electronic-music CDs during the last twenty years. What came out of our coproduction was a really nice album for meditation as well as relaxation: Reiki Healing Hands.

But far before at the end of the 70s up to the 80s I had to experience many different projects like giving guitar-lessons, trying out songwriting with a 4-track tape-machine and joining a band called “Ede Wolf Band” where we tried to play spontaneous music. It worked pretty well, sometimes we even improvised lyrics and singing by our fabulous singer Holler, who managed to create serious or funny lyrics while the rest of us was playing instrumental backgrounds. We were lucky to have drummer Eduard from Schicke, Fuehrs Froehling, who had a really nice rehearsal-room on the upper floor of the music club he was running at that time. We had a lot of fun playing around like that but couldn´t get it on stage. So, finally, that band died without getting famous for its wit and innovative richness. -Anuvida

There have been so many changes in my life the last months (or even years) and I have worked on many different subjects.

Since 2004, when I met my present girlfriend, I´ve been participating in a monthly meeting of a Bhajan singing circle as the guitar player. It is very inspiring and challenging because there are no chords in the songs, so I am free to accompany the singing in my own way, which feels so good to be a part of. It is quite a freeing feeling to be free of any binding song structure.

I experienced profound clarity when I happened to meet two women who asked me to do some recordings of their interpretations of Bhajan songs. I played many instruments and tried out some new things, like adding a bass-line here and there or playing some solo stuff on tablas and keyboards. What came out was a really beautiful album of Indian songs with beautiful singing. This event took me even closer to Indian instrumental music like that of Nikhil Banerjee, Raghunath Manet, and many other superb musicians. I never knew that there is so much to discover in modern Indian music, which is always holds a strong connection to the classics of Indian we all love so much. The music coming out of India today offers such an amazing variety of sounds and melodies.

I ultimately realized our limited “western” point of view of ancient and modern India, based on our culture and education. I felt so tiny and humbled during this project; like I could easily step back into my student-boots and start learning new things once more. I believe that learning in order to erase false attempts towards truth is one of the greatest things that can happen to us human creatures.

I’m still so very grateful to all these chances and changes I’ve come across.

In this sense, sometimes emptiness and absence of creativity is a blessing because it opens up unexplored subjects and aspects of life. Life is full of great unknowns so, perhaps I will end up as a gardener or bicycle- handyman or maybe a painter?

Lots of love and greetings from Berlin,